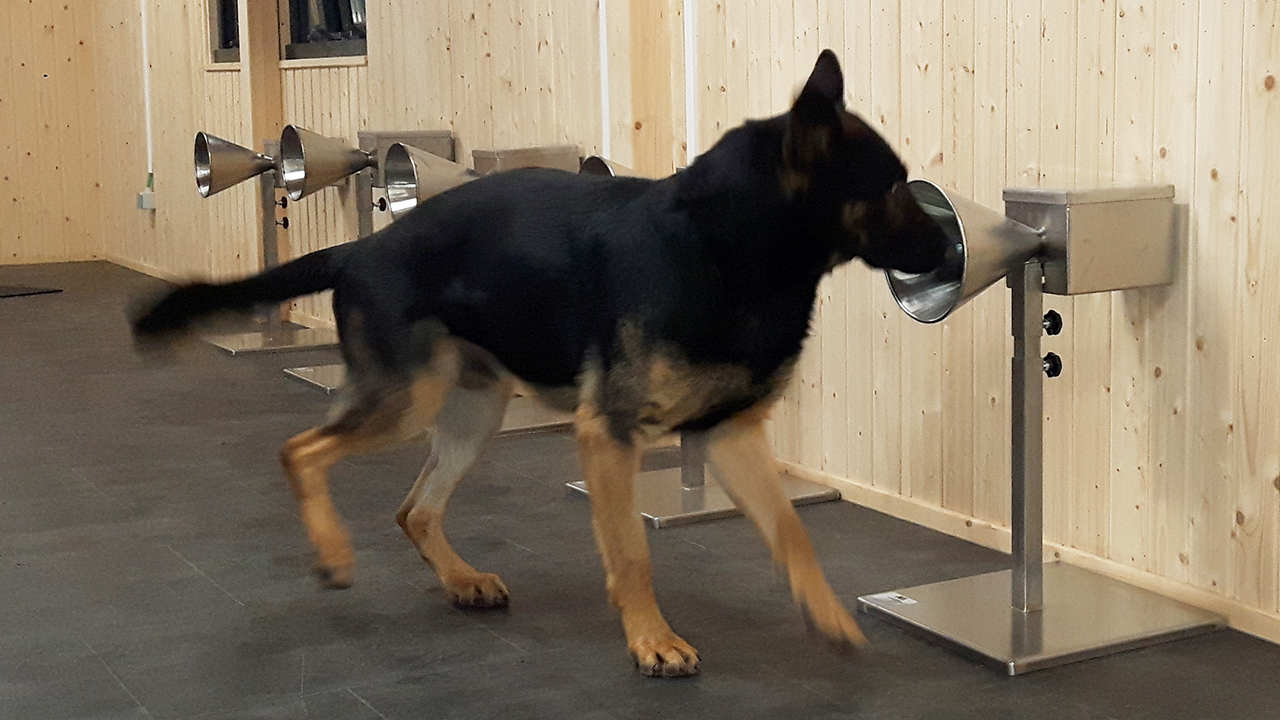 A scientific study involving researchers from ULiège demonstrates the effectiveness of COVID detection by trained dogs. An efficiency of almost 95% on sweat samples of virus positive and negative people.

uring the first COVID-19 epidemic in Europe in early 2020, a study led by Prof. Dominique Grandjean (ENVA & Nosaïs) was conducted on a number of dogs to assess their ability to detect people infected with COVID. For this purpose, sweat samples were collected by applying compresses to the armpits for a few minutes.

As no virus is excreted in the sweat, this method was considered safe for the dogs and those handling the samples. The results were published in December 2020 (PLoS One). In the meantime, other research teams have also been deployed in various countries. On average, the results were observed with an accuracy of 90%, a sensitivity of up to 100% and a success rate of 83-100%. In Finland, the United Arab Emirates, Chile and Lebanon, the dogs are already being used operationally at the border or in airports. Sweat samples from travellers are then presented to the dogs. In the current project, it was investigated whether the detection dogs in Belgium could be retrained to distinguish between COVID-19 positive and negative patients.

Subsequently, all public bodies working with dogs (Defence, Fire Service, Federal Police, Civil Protection) met for the first time in May 2020 at the initiative of the steering committee, where it was decided to join forces to validate these tests. A protocol was drawn up including a budget in which it was decided to allow all training to take place at the Federal Police Training and Accreditation Centre in Neerhespen. It was also decided to work in 2 phases:

A first phase in which the method and the protocol had to be validated. For this phase, a budget of €60,000 was established for the purchase of equipment and the performance of the necessary analyses.
A second phase in which the required number of dogs would be trained for operational use.

The approval of the federal government to start this project was obtained in mid-November 2020, whereby a draft Royal Decree (R.D.) was drawn up by the Ministry of Health for the allocation of the required budget. This Royal Decree was published at the end of January. In addition, the approval of the animal and human ethics commissions was obtained before starting the study. Sweat samples from COVID-19 positive (and negative) patients were collected thanks to the collaboration of about twenty hospitals in Wallonia and Flanders, including UZGent, CHU Saint Pierre Brussels, CHU Liège, CHU-Liège Bruyères, AZ Glorieux Ronse, OLV Aalst Hospital, Jan Yperman Hospital Ypres, Jan Palfijn Hospital Ghent, AZ Maria Middelares Hospital Ghent, AZ Sint- Vincentius Hospital Deinze, St. Peter's Hospital Ottignies, AZ Oudenaarde, ZNA Stuivenberg Antwerp, GZAAntwerpen, AZ Jan Portaels Vilvoorde. The steering committee would like to thank the doctors and nurses of these hospitals. Samples were also taken from various residential care centres, including Curando Ruiselede, Armonea Wilrijk and Armonea Asse.

This made it possible to obtain samples from several hundred patients. Finally, the committee would like to thank all those who were able to help directly or indirectly with this project. Sweat samples were also taken from 550 volunteers via the KIWANIS service club, each confirmed by a PCR result. Most were negative, although about ten positive samples were also found (presumably asymptomatic carriers). All sweat samples were accompanied by a medical questionnaire and were stored and transported in a freezer at -20°C. The steering committee would also like to thank the organisers and volunteers for these sampling days.

All the dogs in the first phase of this project were already trained as tracking dogs, but on other scents (explosives, human scent for search and rescue). In mid-December 2020, 11 dog teams (dog with handler) from the federal police, defence, fire brigade and civil protection started training dogs to detect Sars-Cov-2 on human sweat samples. These were limited to 6 dogs in a later stage, due to the lack of positive samples and in order to train the dogs more intensively. The dogs are aged between 1 and 7 years, including 1 Springer, 1 Border Collie and 4 Malinois Shepherds.

The results from these 6 dogs are very good and promising, and are in line with what has already been obtained in other countries. The diagnosis of COVID-19 using COVID-19 detector dogs in Belgium has a high sensitivity and specificity:

The average specificity is 98% (with 2 dogs reaching 100%, i.e. they never mark a negative sample as positive). The specificity is the probability out of 100 persons that the test produces a negative result in individuals who are not infected by the coronavirus. It is therefore the probability, out of 100 people, of detecting patients who are not ill. As the specificity of detection of the COVID dogs is 98%, this also means that a maximum of 2% of the tests give a positive result, even though the people are not infected with Sars-Cov2. These are false-positive results. The probability of dogs getting a false-positive result is therefore minimal.
The average sensitivity is 81% (between 76% and 94% depending on the dog), i.e. they usually indicate positive samples correctly (based on the PCR result). Sometimes a positive sample is not indicated, and this may be due to the fact that the smell of the cotton has already evaporated or the cotton sample has not been correctly placed under the armpit. Sensitivity is the one in 100 chance that a test will give a positive result in patients infected with Sars-Cov2. It is therefore the probability of detecting sick (or contagious) people out of 100 people. It also indicates the proportion of false negatives. There is still a small margin of error which can be reduced with more training and experience.

The steering group therefore recommends working simultaneously with two trained dogs: in the one condition where both dogs give a positive indication, then a positive result is scored. This reduces the margin of error and increases the sensitivity of the test. It is also recommended that any positive result indicated by the dogs be confirmed by PCR (or other rapid test). In conventional PCR tests, there is a margin of error in sensitivity of 2% to 33%, mainly because the virus particles are highly unstable and are destroyed immediately if not stored at -80°C. At the beginning of the infection, there are also not enough virus particles available to give a positive signal. The odour change in the immune system can be much faster, so that dogs give a positive result more quickly compared to the classical PCR test (as shown in the Finnish study data).

The advantages of such a detection method

The use of COVID detector dogs also offers many practical advantages:

A survey is also being conducted among the Belgian population to assess the general acceptance of COVID detector dogs, via questions such as :

The first results show, for example, that 10% of the population is afraid of dogs. We therefore recommend that the dog test be set up behind a wall out of sight of the test persons, so that people are not unnecessarily frightened by the dogs. 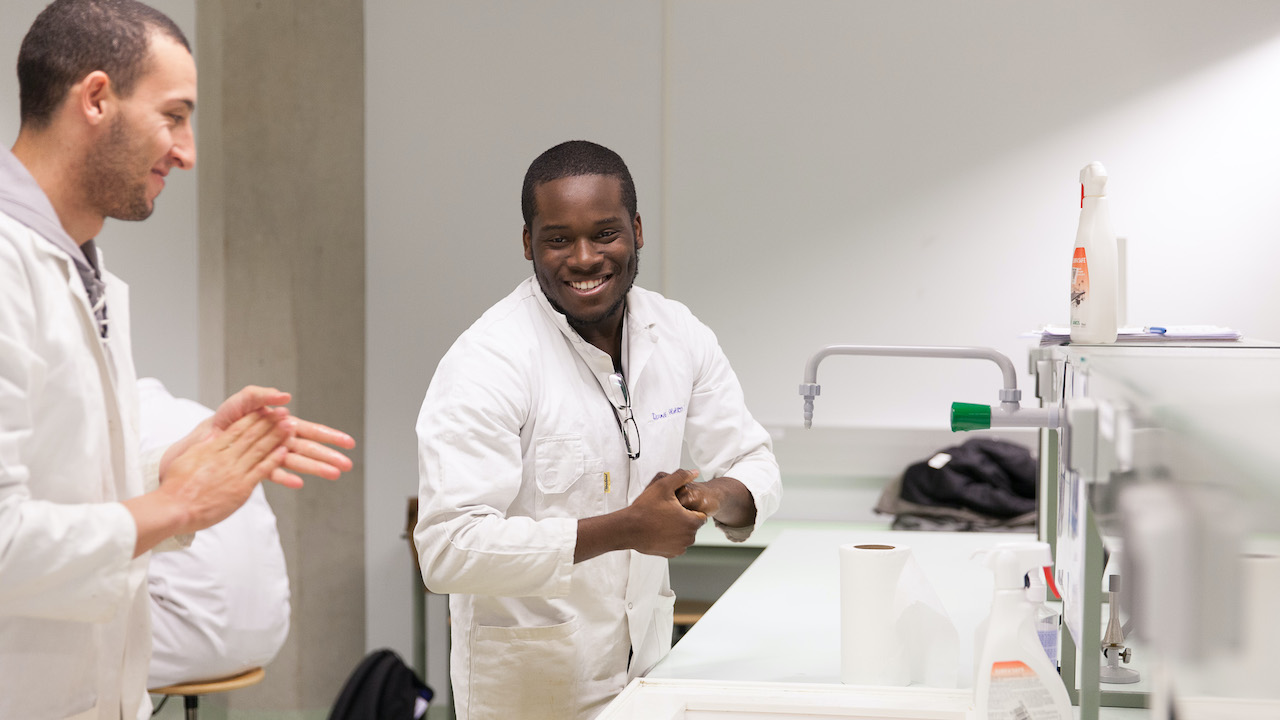 At the University of Liège, students register via an online form. For non EU students, a file has to be sent to ULiège before 30 April 2021.

Vote before the 31st March for your favorite 2€ coin, celebrating the Erasmus Program 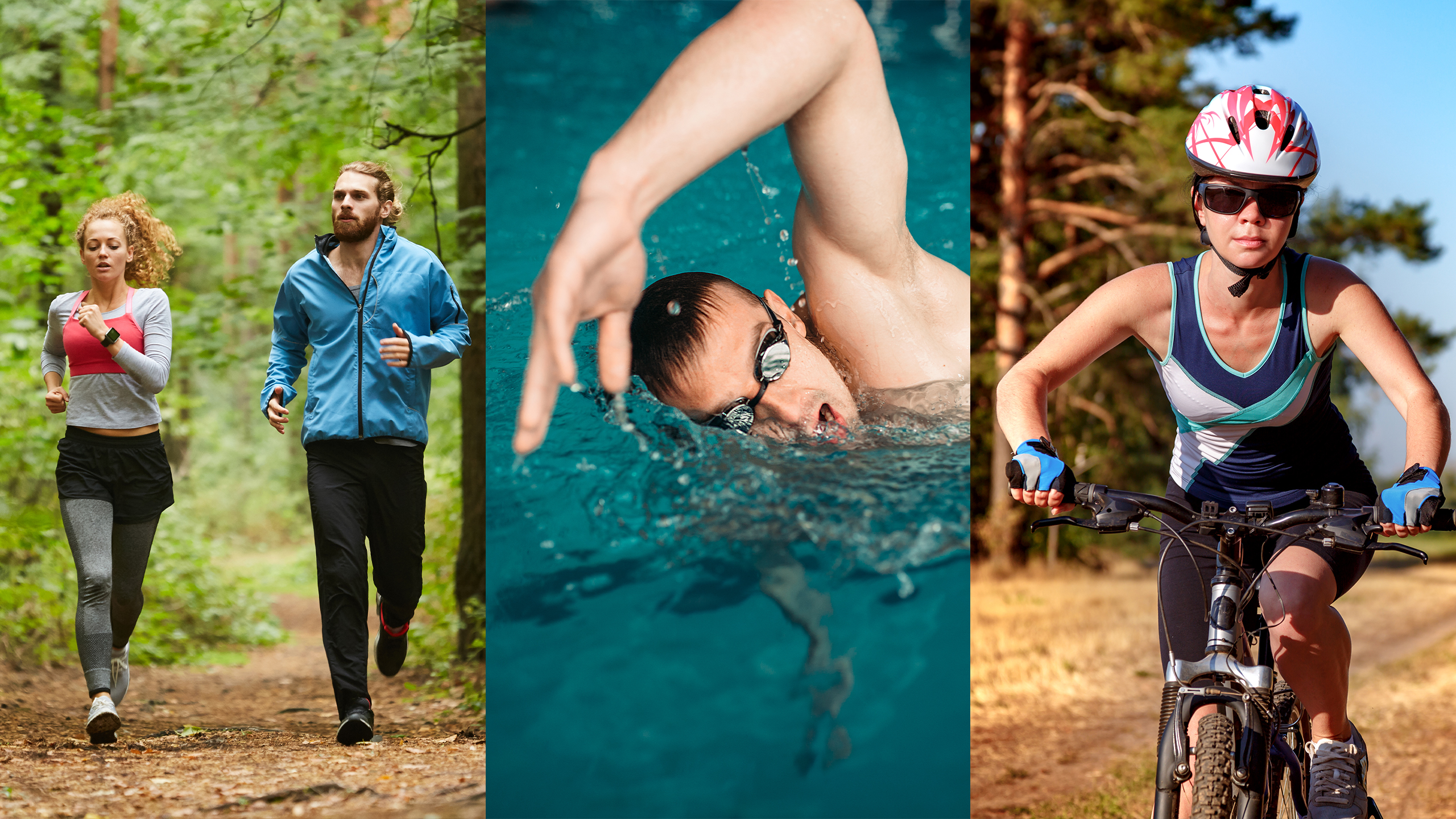